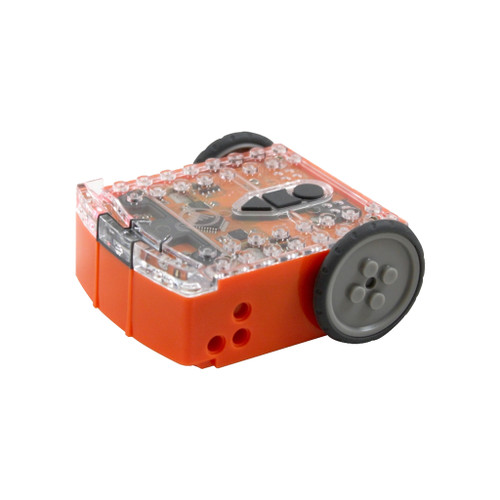 Edison is a programmable robot designed to be a complete STEM teaching resource for coding and robotics education for students from 4 to 16 years of age. Children as young as four years old can begin to explore the STEM education topics of coding and robotics using Edison’s pre-set programs and remote-control operation capabilities. Older students can learn the fundamentals of coding as they progress from drag-and-drop icon-based programming all the way through to coding in a vertical text-based language.

The Edison robot is a powerful, engaging tool for teaching kids computational thinking and computer programming in a hands-on way. With more built-in sensors than any robot in its class as well as lights, sounds and autonomous behavior capabilities, Edison makes true robotics education accessible to students of all ages.

Not just a remote-controlled robot, Edison can:

Edison’s robotics capabilities can be unlocked with ease through simple barcode programs. Students can then progress their robotics, coding and STEM education journeys using Edison with three progressive programming languages.

Edison can also be used to build and invent as the programmable base for an incredible range of engineering and STEM projects thanks to Edison’s expandable robotics system which works with the EdCreate construction kit (not included) and any other LEGO brick compatible building system (not included).