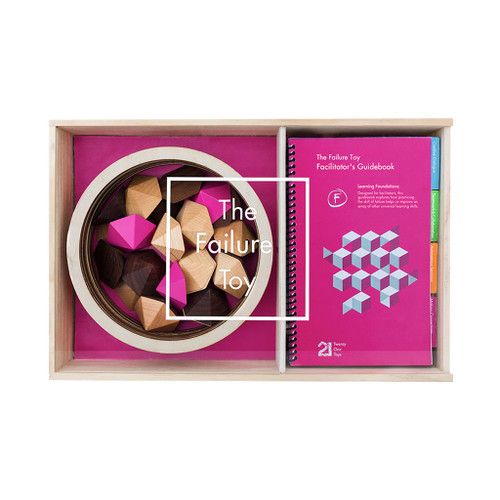 The Failure Toy® is a game of balance and experimentation that helps players develop healthier, more productive relationships with failure. It's really hard to talk about failure. Failure is an ugly word, but studies reveal that "showing kids that failure is a learning opportunity boosts their resilience" and not just kids, but adults too. "Being willing to kill projects is one of the best things that you and your teammates can do". The Failure Toy® challenges the notion that failure is something to be feared and hidden, and instead something that can be practiced and developed as a skill.

Ideal for players aged 9 to 99, the game itself is simple – but the insights it elicits are as complex and unique as the players themselves.

Enough game pieces to engage groups up to 20 players split into 2 groups
A comprehensive guidebook that shows you how to create, adapt and lead highly impactful sessions that explore the challenges and opportunities presented by failure. The guidebook includes game scenarios, discussion topics, and sample lessons to get you playing and experimenting right out of the box
2 drawstring bags to easily transport pieces
Scorecards to track points gained and lost in each round of gameplay
A Failure Award to be given to the player voted as the "winner" of the game. Awarded to a different player each time the game is played, the Failure Award acts as a tangible reminder of all the lessons you learned along the way (plus it's a great way to sneak you extra toy pieces)